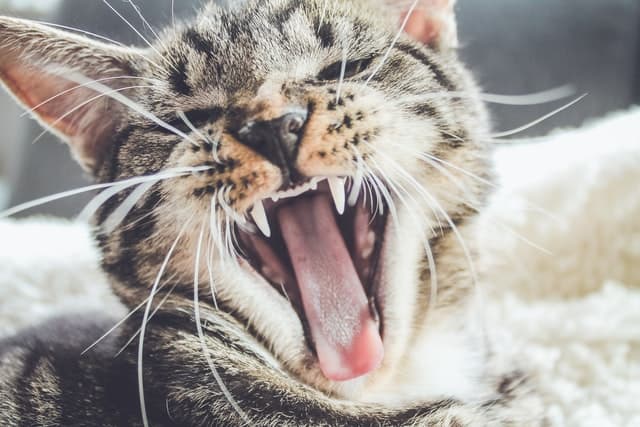 The cat’s tongue feels like a cat is scraping coarse and wet sandpaper across the skin. This feeling of the cat’s tongue is not as pleasant as the emotional meaning. There are several facts about a cat’s tongue. But as a cat owner, cats can also groom you due to licking you. When cats are licking you, it means you’ve earned the trust, and you are accepting into your cat’s pride.

Cats and humans both use their tongues to taste. A cat’s tongue is a fascinating part of the anatomy and interesting to see. Cat’s tongues are maybe the busiest part of their anatomy. The tongue is multi-functional and helps cats to eat, drink, and grooming. So the tongue is not only used to taste the food. You can immediately see why this organ is so useful if you look closely at a cat’s tongue.

In this post, you can read more about interesting facts about the cat’s tongue. Of course, this post is not about cat tongues in the form of biscuits or made of chocolate. Here you can read about the facts where cats use their tongue for and how does a healthy cat’s tongue look like. At the end of the post, you can see a close-up youtube video of a cat that is using the tongue while drinking.

Interesting Facts about the Cat’s Tongue

Cats love to look and feel good. They do this by often cleaning themselves with their tongue. The sandpaper roughness of your cat’s tongue against your skin means that your cat likes and accepts you. Cats groom people they love. Below you will find seven interesting facts about a cat’s tongue.

A cat’s tongue looks like sandpaper, especially if the cat is licking lovingly in your face. That rough is because the cat’s tongue is covering with small papillae that point backward, toward the cat’s throat.

Papillae on a cat’s tongue are long barbs consisting of keratin. These papillae help the cat to remove dust and dirt from the coat and remove loose hair.

As a result, a cat is always beautifully clean, and the coat looks very fine (if the cat is healthy). Cats can also clean meat off animal bones by using their tongues.

But the barbs can also trap items that a cat should not eat. If a cat is playing with a rubber band or rope or something and puts it in the mouth, those papillae direct it right to the back of the throat. This can lead to issues.

Cats lick their coats to regulate their body temperatures, and in the summer they are wetting it down with saliva to stay cool. When a cat is licking, the moisture that is left on the fur produces an evaporative cooling effect similar to sweating in humans. By licking the coat, a cat can keep itself cool. After licking the skin is up to 17 degrees cooler than the topcoat.

The tongue collects fur, fleas, skin flakes, and dirt. The cat is swallowing this waste, and it is digested by stomach acid. The disadvantage of the rough tongue is that sometimes a lot of hair gets into the stomach and intestines of a cat. If the stomach acid cannot fully digest it (typical by older or longhaired cats), hairballs may form and then eventually throw it up.

Rope or wires that a cat licks up are more dangerous. Unfortunately, due to the papillae, it cannot leave the body naturally. If the cat swallows these things (rubber bands, rope, wire, etcetera, then it can cause significant problems in the stomach or intestines.

Cats have more taste buds than humans. Cats are obligate carnivores; it means that they eat only meat. With, among other things, the taste buds on the tongue, animals can perceive different flavors such as sweet, sour, bitter, and salt. There is some confusion as to whether cats can taste the same five flavors that humans can (sweet, salt, bitter, sour), but most people agree that cats have their preferences, just like humans.

In cats, the smell is much better developed than the taste. It seems that cats cannot taste sweet; their taste buds are not evolving to detect sweet flavors. Cats are very sensitive to bitter, a taste that often indicates toxicity. Because cats struggle to detox, they are careful about eating bitter products.

Cats can get compulsive behavior. Grooming releases endorphins, so when a cat gets anxious or stressed, they lick themselves. And sometimes they overdo the licking behavior. In another post on this website, you can read more about Why Do Cats Lick and Groom Themselves?

Cats that are under stress can lick themselves bare. If the stress lasts a long time, it can eventually cause your cat is getting open wounds from the many licking behaviors. Incidentally, hairless spots are, in most cases, the result of a medical problem.

Many cats enjoy licking themselves clean or licking another cat. Washing each other is also a form of pleasant contact between cats. But if a cat licks too much, it can get hairless, for example, on the belly. If this is the case, it is good to ask a vet to help rule out other problems. And maybe you also want to discuss ways to reduce your cat’s stress.

Cats also use their tongues for drinking. While it may look like that cats and dogs are lapping water into their mouths, this is not the case. Cats are not drinking in the same way as a dog: they don’t ever put their mouths in the water. Cats only touch the water with the tip of the tongue and then quickly pulls the tongue in the mouth.

The papillae on the cat’s tongue are pulling water up from the surface.
The cat immediately closes its mouth and keeps some of the liquid inside. A cat is doing this three or four times until it has a good amount of water in the mouth, and then the cat swallows it.

Cats are lapping at a rate of four times per second, so this is too quickly for the human eye to see. The information about the drinking behavior of cats was only discovered after a whole team of researchers took a series of high-speed photographs of cats that are drinking.

A cat will take care of itself and lick it clean with the tongue if a cat has hunted. A cat cleans itself to erase all evidence of the recent murder. Cats are small enough, which makes them prey and predator. Therefore, cats do not want to leave traces of their whereabouts that other predators can track. A cat’s tongue is therefore very useful in this task.

A cat’s tongue and gums can vary in color. It depends on whether the cat is getting enough oxygen throughout the body. The color of the tongue of a cat should be pink. But there are exceptions include animals with blue or purple tongues. The gum should have a bright, healthy pink color. If the gum has pale pink, blue or white shade, it is better to contact your veterinarian. When the veterinarian does a routine check-up, it will always check the cat’s tongue. The vet is then checking for changes in color and bumps, ulcers, or any lumps.

If you want to know more about the cat’s tongue, you can also take a look at the website of national geographic. This post goes about understanding cat tongues.

That Is for My Cat is a participant in the Amazon Services LLC Associates Program, an affiliate advertising program designed to provide a means for sites to earn advertising fees by advertising and linking to amazon.com.